This soft-spoken, introspective elder is the Michaelite Muse of Architecture. Under his guidance, the Court Schools and Guilds of Architecture recreate Michael's vision in the city's buildings, streets, and gardens.

A dignified old man, sporting a full white beard, bushy eyebrows, and a fringe of wispy hair, his dark brown eyes seem to stare through people, floors, and walls alike, as if he were lost in thought. He is morose in demeanor, and his every movement appears heavy, burdened by the weight of age.

Anthemios of Tralles was an esteemed professor of Geometry and an extraordinary architect, best known for his collaboration with Isodore of Miletus to build the Hagia Sophia. His work showed an intuition and artistry that inflamed Michael’s passions, but the methuselah understood that Anthemios could accomplish far more for the Dream during the day and so he delayed giving him the blood. The mathematician was not Embraced until he neared the end of his natural life, and inspired by Michael’s guidance, attacked his new duties with the fervency of a true believer.

For centuries Anthemios performed his duties with skill and flair. He even discovered that he had a talent for politics, and provided a foil for Petronius for a very long time, even serving a few stints as quaestor. While considerably more autocratic in the execution of his duties than his fellow Muses, few could argue with his precision, profusion and organisation, given Constantinople’s reputation as a city of architectural marvels. He also maintained a broad correspondence with both mortal and Cainite architects, including the Toreador Elsh of Jerusalem and the Nosferatu Zelios. Anthemios has Embraced more than any other Michaelite Muse, and many Toreador spread throughout the empire, the Levant and North Africa count him among their ancestors.

Still, his primary focus is not so much on the empire as on the beautification of the Queen of Cities itself, and Anthemios pursues this goal single-mindedly and, some say, tyrannically, through the auspices of his craft guild. Also, like many of the Michaelites, the Muse of Architecture has not been quite himself for more than a century. He no longer displays any interest in Trinity politics, nor does he seek the company of his fellows save for that of his favored great-grandchilder Marcella and Zoe. When he does socialize, he often appears distracted and seems oblivious to those who seek his attention, mumbling a plethora of seemingly unrelated algorithms while staring at walls, arches, and columns.

Much of this wiki page was lifted from Haligaunt’s chronicle The Concord of Ashes. 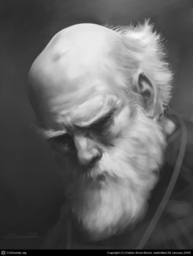