A scholar and lover of classical philosophy, this devout Catholic monk has traveled to Constantinople to ease his sire's growing madness and bring his blood kin Estienne's murderer to justice.

Pale even for a Cappadocian, this pudgy, bald monk is quiet in both appearance and demeanor. Dull, azure veins weave across his skin like morbid lacework and frame his flashing, icy blue eyes. Wearing the habits of the Benedictines, a black, wool tunic, confined at the waist by a belt of leather or of cloth, a scapular the width of the shoulders reaching to his the knees, and a heavy cowl, he is the very image of a man of God.

Born in Provence, Gaurin was the seventh son of a seventh son. A weak child, facing constant illness, he could rarely perform chores or conduct other family business. Gaurin’s father, grieved by his son’s worthlessness, sent the boy to work as an apprentice steward for a local lord. The lord, however, couldn’t use him either. Gaurin was unsuited to the complexities and stresses of courtly life. Upon visiting the Abbey of Cluny on an errand for his lord, Gaurin was filled with a religious fervor and dedicated himself to the cloth.

Gaurin found a place for himself amidst the Abbey’s vast repository of knowledge, and has proven to be well fit to the rigors of ascetic life. It was Gaurin’s faith and quickness of mind that caught Maieul’s eye, and one night the Abbot came to the young monk and began indoctrinating him into the realm of night. Eventually, Maieul revealed his secret and was pleased to find his student was neither surprised nor frightened. Gaurin was offered the embrace soon after.

Since, Gaurin has formed an intimate bond with Maieul, his brood-mate Brother Estienne, and his ever-present guardian Sister Génevieve. Estienne’s death and its effect on Maieul drove him to travel with Geneviève and the Nosferatu Rodrigo, and he hopes that, if he were to find the culprit or culprits behind his brother’s murder, he will save his sire from the paralyzing melancholy that’s plaguing him. 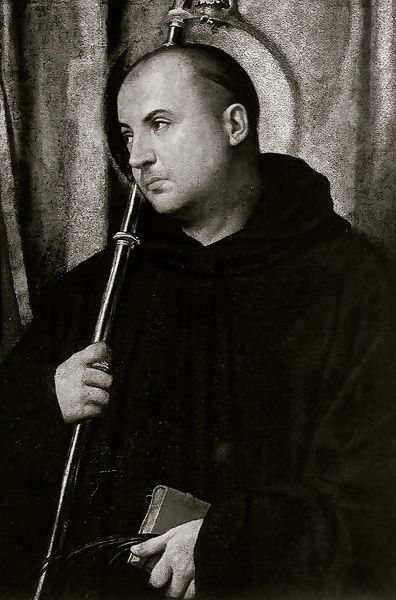