A master artisan of fresco and ceramics, this favored nobelwoman has grown disillusioned with her fellow Toreador and fallen under the influence of the Children of Judas in recent years.

Known for her biting wit, her dark, fiery eyes, and her swerving, sometimes dangerous smile, this lascivious noblewoman is a tempest of passion and sorrow. She is dressed in colorful, embroidered silks and flashing jewels, and her auburn hair is adorned with pearls.

Once a rising star of the Michaelites, Marcella, like her bloodsister Zoe, has fallen under the influence of the Children of Judas. Though she is still a prolific artist, she has almost entirely forsaken religious art in favor of classical, more secular themes. At the most recent gala, Petronius was heard remarking that her most recent fresco borders on blasphemy. Naturally, her time spent at the Silk Road and the many rumors circulating about her growing carnality do nothing to assuage the growing sentiment that it won’t be long before she ceases creating completely and becomes little more than Sarrasine’s plaything. Regardless, Marcella is still the finest frescoist in the empire despite her eccentricities. 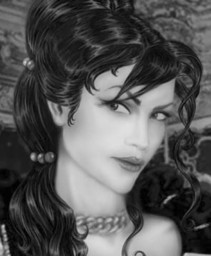