A leprous wretch adorned with tarnished Archon's armor, a Roman cavalry longsword hanging from his hip.

Dressed in century-old, care-worn Archon’s ceremonial armor, his otherwise sturdy frame is covered in leprous sores from head to toe, and his skin is a sickly shade of yellow. Fresh blood weeps from a particularly grievous lesion on his left cheek. What was once a mane of curly dark brown hair is now a patchy mess adorning his proudly held head. A well-maintained Roman cavalry Spatha, the hilt engraved with the Chi-Rho insignia of the Thema Anatolika, hangs from a scabbard on his hip.

A middle child born into a merchant family of Equestrian rank, Theodosius Kontostephanos knew from a young age that commerce was not where his true passion lay. No expense was spared on the boy’s education, and he was instructed by private tutors in the Classics as well as rhetoric and Scripture. Theodosius reveled in the ancient tales of glory and battle as much as he was fascinated by the peaceful example set by Christ. He resolved to become a soldier of peace, to shed his blood and fight righteously so that others could be free to follow more directly in Christ’s footsteps.

When he was 15 years old, the Kontostephanos family used its influence to get Theodosius assigned as an aide to a Kentarchos (Captain) in the Thema Anatolika, the Byzantine army responsible for defending the Empire’s southern border with the Seljuq Turks. Theodosius took readily to military camp life, making friends and learning the native tongue of the Frankish mercenaries under his command. After completing cavalry training, he was promoted to Dekarchos (Lieutenant) and placed in command of a heavy cavalry unit of 10 cataphracts.

Theodosius distinguished himself in battle under the command of the Pale Death of the Saracens, future Emperor Nikephoros II Phokas at Aleppo in 962 A.D. by rescuing a fallen battle standard (which also doubled as a holy symbol) from enemy hands. Seeing the standard fall ahead of him, Theodosius led his men in a near-suicidal, heroic charge to rescue it from the enemy’s grasp. Throughout the campaign season of 962-963 Theodosius proved himself to be honorable and reliable in the field. So impressed was Nikephoros with Theodosius’ bravery and piety that he appointed Theodosius Archon to the Patriarch of Constantinople upon his ascension to the throne in 963, and it was then that Theodosius’ good fortune ended.

On December 10, 969, after faithfully serving Patriarch and Emperor for nearly 6 years, Theodosius was asked by a bishop to run a late night errand to the Imperial residence. The night was a special one, for a group of conspirators led by the Emperor’s wife and nephew had picked it to assassinate Nikephoros. Arriving at the palace gates and finding them unguarded, Theodosius entered to investigate. He navigated the labyrinthine corridors to the Emperor’s living quarters and found his former commander choking on his own blood, cut down on the floor where he slept each night before the holy icons. Ever indignant, the prominent general John Tzimiskes gloated over his dying uncle, “Tell me, most senseless and malicious tyrant, was it not through my actions that you attained the heights of Roman power? How therefore did you pay no regard to such a good service? How, blinded by malice and madness, did you thus not hesitate to remove me, your helper, from command of the army?”

Theodosius erupted with rage at the sight of his dying patron and thoughtlessly charged into the room to take vengeance. Hopelessly outnumbered by the traitorous general and his co-conspirators, Theodosius was wounded and forced to flee for his life. Nikephoros was dispatched, and his head was severed and placed on a pike to be paraded around the city.

Knowing full well that if infection didn’t kill him, the coup plotters would, Theodosius lost himself in a seedy district and sought refuge in a church there. Father Alexander Christoforos granted Theodosius succor, treated his wounds as best he could, and received his confession. It seemed unlikely that Theodosius was long for this world given his predicament, but Father Christoforos was impressed with Theodosius’ devotion and integrity. As fate would have it, Christoforos was one of the many contacts used by Malachite, the Rock of Constantinople, to provide and pass on information related to the state of the city’s poor and unruly. He signaled his contact that he required a face-to-face meeting, and the next night Malachite came to the church basement to meet the dejected and desperate Kontostephanos.

At first Theodosius was put off by Malachite’s hideous appearance and gravelly voice, but had he not charged forward even as the riders to either side of him were felled by the enemy’s lances at Aleppo? He betrayed none of the fear and revulsion Malachite inspired in him. Perhaps sensing a kindred spirit, or at least a man with enough strength of character to suffer the indignities thrust upon every Nosferatu, Malachite made Theodosius a proposition:

What I offer is not an escape. The Road ahead is harder than any you’ve yet known in this life. I and my kind are the eyes and ears of this city, and we sense trouble coming. Men such as yourself are needed to keep the Empire and the Dream it embodies safe from those who would see it dashed to pieces. What I offer is a blessing that comes with many curses, for those most favored by God are often weighed down with the heaviest of burdens. You would look like me, and you must believe me when I tell you that it is every bit as painful as it appears. We are creatures of the night, and you would never be able to look upon the sun again. A Beast inside you will thirst incessantly for the blood of those who still live. However, my affliction is not without its advantages. You would have the strength of ten men and be able to move unseen throughout the city. Perhaps most importantly, you would be able to continue to serve God and Empire until the End of Days. It would be my responsibility to guide you and instruct you in our ways, but that is a burden I would gladly be willing to bear. What I offer you, Theodosius Kontostephanos, is a second chance. But make no mistake – the price is a heavy one to pay.

They spoke throughout most of the night, and Malachite answered Theodosius’ questions in honest, grisly detail. He explained the dual nature of Cainites, as well as the responsibility to humanity that God had given them, and he also demonstrated his supernatural strength and stealth. He explained the Embrace and the painful changes that follow it. When Father Christoforos informed Malachite that dawn would soon be upon them, Malachite told Theodosius to take a day to think about his proposal. He would return the following night for an answer.

For his part, Theodosius was incredulous at first. It took several demonstrations, culminating with Malachite bending a wrought iron bar with his bare hands, to convince him that Malachite was telling the truth about his abilities. Malachite quoted Scripture at length, and they prayed together to assure Theodosius that Malachite was not a demon sent to tempt him. Once convinced, Theodosius listened with rapt attention. He respected Malachite’s directness and honesty about his existence.

Theodosius found that he couldn’t sleep that day with Malachite’s words swimming through his mind. Instead he deliberated, spoke with Father Christoforos about Malachite and his kind, and prayed for guidance. No easy answer was forthcoming, but in the end Theodosius made up his mind that his work in this world was not yet finished. He thus resolved to take Malachite up on his offer. The following night when Malachite returned, Theodosius bid the old priest Christoforos thanks and farewell, and he traveled with Malachite to his haven.

The ecstasy of Embrace gave way to fear as Theodosius’ vision faded to black. When he next awoke his skin felt like it was on fire, and he realized that his heart no longer beat. Over the next 7 days, painful muscle spasms wracked his body as itchy, peeling lesions appeared all over his skin. Malachite never left Theodosius’ side, offering words as soothing as he could muster and applying salve and pumice stone to the lesions as they appeared. When it was over, Theodosius barely recognized his own reflection.

For all intents and purposes, Theodosius Kontostephanos died on December 12, 969 A.D. After he failed to resurface over the weeks following the Emperor’s assassination, his pursuers were convinced that he had either died or fled, so they stopped searching. Living in the cisterns and sewers of Constantinople for the next fifty years, Malachite instructed Theodosius in the use of his new abilities, offering equal parts earnest encouragement and stern discipline depending on Theodosus’ actions. He indoctrinated Theodosius into the Road of Heaven, taught him the ethics of feeding on mortals, and tempered Theodosius’ brashness with Nosferatu caution. Malachite urged patience above all else. There was much to learn, but Theodosius now had all the time in the world to learn it.

Over the following fifty years, Theodosius began completing assignments independently, and Malachite encouraged him to find a project of his own to further the Dream. Following orders was one thing, but Malachite told Theodosius that he was not his lord or commander. The measure of a man, in Malachite’s eyes, was not how well he followed orders or carried out instructions. It was his ability to think and act independently and the choices he made that marked him as virtuous.

Theodosius, via his and Malachite’s network of informants, sensed the growing discontentment and unrest in the city. This, combined with the threat of a resurgent Seljuq Turkish empire to the south, convinced him that the vast knowledge contained in the city’s libraries and monastery was no longer safe. He befriended Barnas, one of the Baron’s Gangrel, and together they and the Tzimisce Keeper of the Faith began to smuggle sacred and forbidden texts from the Obertus monastery out of the city.

Barnas was the closest thing Theodosius had to a friend in this world, and his murder has hardened Theodosius’ heart. He is wary of all his fellow Byzantine Cainites, with the sole exception of Malachite. With his only trusted link to the Baron’s Gangrel dead, he worries that Barnas’ replacement, Mother Agnes, is not what she appears to be. Of all the Gangrel, Theodosius is most cautious around Verpus Sauzezh, as he is uncertain whether a Muslim can possess the same level of integrity as a Christian.

Although he realizes that he is playing a dangerous game by getting close to the man, Theodosius can’t help but like the Obertus Tzimisce Myca Vykos for his amiable manner and tolerance for Theodosius’ appearance, as well as the fact that he casts himself as an outsider to Byzantine Cainite politics. Theodosius, though he finds Settites and their vices distasteful, has also lately spent time speaking to Sarrasine, as he realizes that the Settites can be an invaluable source of information. 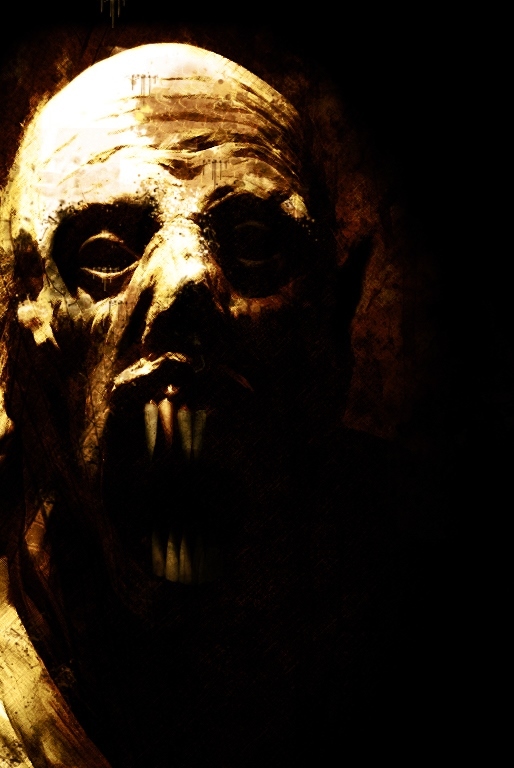