A Shadow over Zara 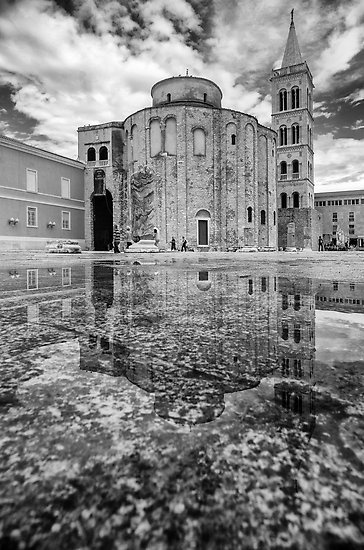 The coterie parted ways with Gari and his new galley upon reaching dry-dock in Zara’s expansive harbor and began their inquiries as to the location of the Orthodox monastery said to reside near the city. Their investigation brought them to the attention of the local Archbishop Cosimo Madii who promptly had them intercepted by Grimaldi, a man to whom the shadows clung like pitch, and brought to St. Donatus’ Church.

Before discussing his reasons however, Archbishop Madii insisted that his visitors participate in the Sacrament of Confession. Rodrigo, Gaurin, and Geneviève all acquiesced, even to the extent of sharing their sins honestly, and despite their preconceptions, were given sound spiritual and moral counsel by the Archbishop.

Once the three finished their penances, they were brought to St. Donatus’ tower. Each noticed strange inconsistencies with common Roman Catholic symbolism in the stained glass that lined the stairways on the way to the Archbishop’s chambers, the most conspicuous being the striking resemblance between the countenances of St. Donatus and Cosimo Madii.

The meeting took place on the tower’s balcony, the dawn drawing closer with each word. According to the Archbishop, a ward and convert of his named Zubor had disappeared, most likely kidnapped by the Obertus monks at the self-same Orthodox monastery that Geneviève, Rodrigo, and Gaurin were seeking. Madii offered his hospitality in exchange for the return of his student. The three travelers agreed and were escorted from the tower to the church’s catacombs.

After a day’s rest, Grimaldi saw the coterie off the church grounds to their horses, but left a warning before departing. “Do not return.” Whether a favor or a threat, the three young Cainites heeded his message and rode east toward the snow-capped Dinarides.