Upon granting Paulidis his freedom, Theo ghouled the rogue and sent him out to gather information on the city’s current condition. As the coterie continued on its trek and came closer to the battlements, they passed small collections of homes painted white, light blue, or a pale yellow. Lazy curls of woodsmoke spewed from the chimneys and the faint glimmers of candlelight escaped from cracks in the shuttered windows. Beyond, the industrial quarter protruded from the city’s walls, like mass of ashen barnacles surrounded by a russet haze of noxious fumes sprung from various acids and dyes and the decaying piles of raw animal hides behind the district’s many tanneries. Even to the undead, the place seemed unclean. 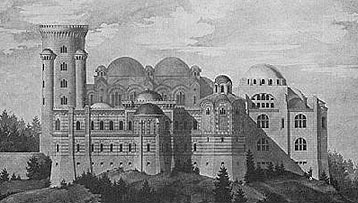 The coterie split from the Egnatian Way just as it began to sink into the slums of the industrial quarter, heading instead to a Nosferatu haven in the wine cellars of Jucendiae Palace. The road they followed took them first along the walls, and then back out into the surrounding countryside. Before reaching their destination, the four travelers came upon the outskirts of the refugee camps mentioned by Paulidis. Surrounded by a hastily built yet expansive palisade of garbage, overturned wagons, and sharpened logs, the grounds appeared to be more of an internment camp than a refuge for the poor sods escaping the Turkish hordes.

Upon reaching the cellars of Jucendiae Palace, Theo introduced his 3 companions to his sire Malachite, who was residing there to gather news on the disaster at Manzikert. Although somewhat vexed by the sudden intrusion upon his haven, Malachite welcomed his childe’s companions, but made it clear that they were being granted sanctuary thanks to his good graces.